PAST THEATRICAL OFFERINGS FROM SUCCESS 5000:

“Two one-man shows, both entitled “Rendezvous with Destiny,” both end up happening simultaneously during a Fringe organization mixup. It’s almost as if they were … booked on top of each other … While the ‘opposites attract’ trope has been done, rarely is it done with as much wit and heart as it is here. It’s hard to say which show is funnier: Joshua Lee Coss’ deeply personal one-man show (a very loving parody), or Robyn Slack’s bizarre and hilarious music. The developing bromance, amazing one liners, and the interplay of two opposing Fringe shows all make this play really memorable. (The songs are still stuck in my head). This show is a very, very, very funny must-see at this year’s festival.”
—Miya Abe, Vue Weekly 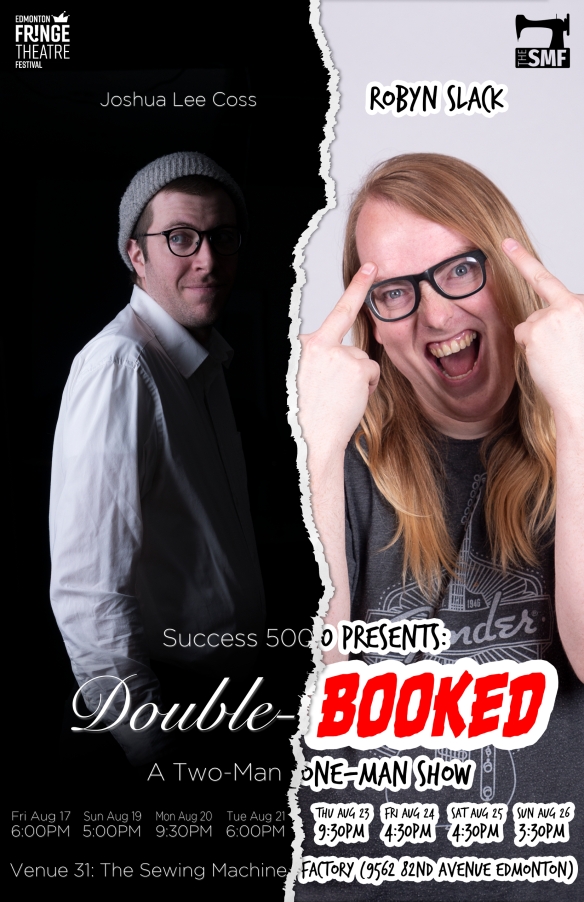 “Even the program for this show is entertaining in itself: there’s a black and white stretched out jpeg of a dog in the middle with no explanation. Success 5000 guitarist and singer Robyn Slack picks it up in the middle of the show and questions the dog and why there’s six different fonts and typos. Success 5000 is a comedy sketch performance with self-depreciating, nihilistic, and sarcastic humour that’s both current and genuinely hilarious. Duo Slack and Josh Coss quip between songs and poke fun at each other, but mostly at the fact that Slack writes all of their music. The show is worth checking out for two grown men picking fun at each other between laugh-out-loud nihilistic music—just try to keep up with the audience-driven ‘Pickle’ song.”
—Michelle Guthrie, Vue Weekly

“It’s the old random-characters-stuck-in-a-locked-murder-manorhouse scenario. Except this time they’re from different time co-ordinates – 1898, 1947, 1987, 2017, etc. — thrown together by an electrical storm and a quirk of quantum physics, with a recurring character, professional time traveller-detective Rigby Muldoon, to help sort things out.”
—Roger Levesque, Edmonton Journal 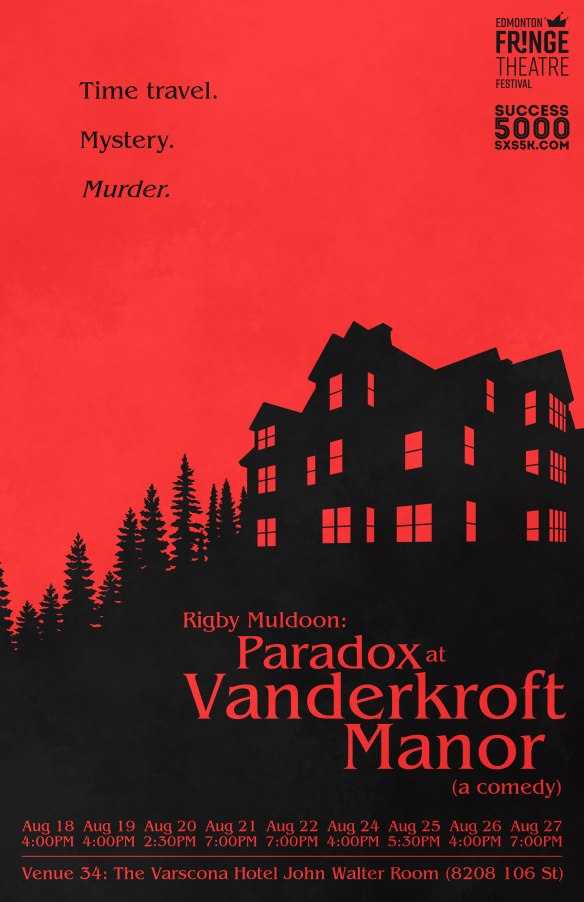 “James Bond meets Groucho Marx meets time travel in this slapstick police thriller. It’s a great mashup of genres and tropes, and the show is full of robot dinosaurs, temporal paradoxes and hilarious, time-freezing fight scenes. While the actors are sometimes a little bit too in on the jokes, the audience didn’t seem to mind and appeared to be genuinely intrigued by the show’s mechanics. After laughing their bellies off, many audience members could be heard at the end of the show trying to figure out how this character or another could have been in two places at the same time.”
—Bryan Saunders, Vue Weekly

“A clever, funny comedy about art, ambition, murder and hipsters. It incorporates period flavour (and a few winking references to Strathcona today) into an engaging story and fast, sharp dialogue, and the original song that ties the plot together is catchy and sweet.”
-Robin Collum, Vue Weekly